[ The face of New Orleans - all photos by Ted Qaunt ]
Last week, I spent a couple of wonderful days in Washington DC for a talk and visit with the National Juvenile Defender Center Leadership Summit at the Mayflower Hotel. Among truly amazing and heroic people, including many friends, my visit also included lunch and an interview with the Justice Policy Institute and a tour of the offices of the Hispanic Communications Network and the Self Reliance Foundation, where I am part of their gang violence prevention educational media initiative, “2 Cooltura” (I have done a nationally-distributed opinion piece and a radio interview for them already). 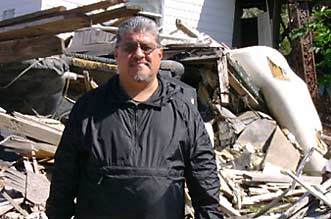 [ Luis J. Rodriguez in front of what was once someone's home ]
On Saturday, October 28, I flew to New Orleans, where I’m a scheduled participant in “Words and Music: A Literary Feast” from November 1 until November 6, sponsored by Pirate’s Alley Faulkner Society. This year’s theme is “The Impact of Hispanic Cultures on US Life and Literature.” Among the quests are Ana Castillo, Jose “Doctor Loco” Cuellar, Gabriela Hernandez, Marie Arana, and many others.

I’m staying at an old colonial place, Hotel Provincial, in the French Quarter.

I came several days early to meet with friends in New Orleans, in particular long-time community leader Ted Quant. On Saturday night, Ted and I attended a jazz concert at the Snug Harbor Jazz Club on Frenchman’s Street, filled with Halloween-costumed partygoers (Bourbon Street looked as packed as Mardi Gras that night). I heard a number of great singers and musicians, including Charmaine Neville (a member of the renowned New Orleans Neville family), who is known as a local hero (she helped her neighbors hold out in a school for several days after the storm, among other things). 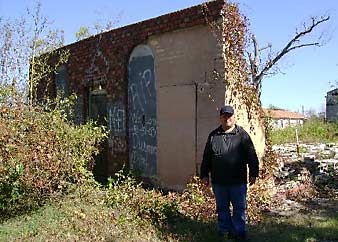 [ Standing in the ruins of New Orleans ]
In addition, I was privileged to catch a set with Nicholas Payton, famed local trumpeter and pianist, and his quartet – an amazing show (I’m a long-time jazz fan).

I also wanted time to visit the city, especially the Katrina-devastated 9th Ward. Ted gave me an intimate tour of the flooded areas; Ted lost two homes in the 2005 hurricane (he’s still dealing with their repairs more than a year afterwards).

We went through the most-flooded communities of the city, I felt sorrow at the deep loss of lives, homes, and community. Much of the 9th ward has been razed, but there are still remnants of crumpled homes, rusting cars, mud, and storm debris. You can see that so much more has to be done – yet there is a sense among many community members that the city will not restore these areas. The city is now less than half of its population before Katrina (which was around 450,000). Although African Americans made up close to 70 percent of that population, today it is less than half. 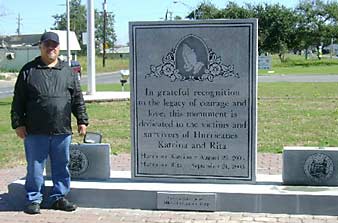 [ Standing next to a New Orleans memorial to the victims of Katrina ]
Many people have returned, of course, to rebuild and make New Orleans their home again. But too many others don’t appear to be returning from the Katrina diaspora that included tens of thousand of people to cities all over the country. After a year, kids are now in new schools, jobs are being held in the new cities, and not much has happened by way of jobs or resources in New Orleans to help them come back.

I was also able to attend a Story Circle with an old friend, John O’Neil, at the Ashe' Cultural Arts Center. An initiative by Ashe' to open up an enriched dialogue on race and change is using John’s amazing ideas and work to help the process.

I have learned that in the midst of great trauma, there are many fantastic efforts to bring about true healing and real restoration and peace. There are also many examples of deep abandonment, mistrust, and uncertainty.
general
Do you like this post?
Tweet