A Good Way to Start the New Year 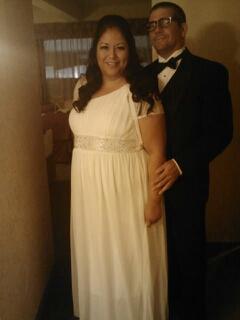 This past Thursday, January 3, 2013 two important family events occurred.
First my daughter Andrea, who’s now 35 years old, married Sean Patrick Kenney in Las Vegas, Nevada. I’m so happy for her and Sean. Andrea’s 16-year-old daughter Catalina was there as well as Sean’s 8-year-old son Trevor. We plan to have family and friends do a reception in L.A. later this month. I send many blessings and much love to my only daughter Andrea, who I love immensely, and to Sean, a great person and partner for Andrea.
May their union be unbreakable and soul sustaining.
Also that day my brother-in-law Tony Cardenas, my wife Trini’s brother, was officially sworn in as U.S. Congressman for the 29th District – the first Chicano/Latino from the San Fernando Valley to be in the House of Representatives. Trini and I were at his new offices across from Congress in Washington D.C. watching the proceedings on TV (Tony could only have a couple of people inside the chambers during the opening of the new Congress, which included his 14-year-old daughter Alina).
Many new congresspersons were sworn in that day. Like Tony, they had receptions in their new offices. However, Tony’s reception was particularly large and brown. Many family and friends from the San Fernando Valley were there—brothers, a sister, cousins, and his sons, daughters, and many nephews. Also at the reception were members from Tony’s old staff from his former L.A. city council offices, other friends and supporters, and such notables as California State Senator Alex Padilla, California State Assemblyman Raul Bocanegro, L.A. School member Nury Martinez, L.A. City Councilmember Felipe Fuentes, and others.
That evening a wonderful dinner was held at the James Madison Room of the James Madison Building in Washington D.C. It was quite moving when Tony arrived with his wife Norma. Many applauses – this is a big deal. When Tony spoke there were many tears. I’ve known Tony for as long as Trini and I have been a couple – close to thirty years. He’s grown up a lot in that time. I remember him then as a quiet, unassuming and bright young man. Now he is a true leader, sturdy and strong, with many accomplishments (he was the first Latino from the San Fernando Valley in California’s State Assembly and an L.A. City Councilperson for many years). 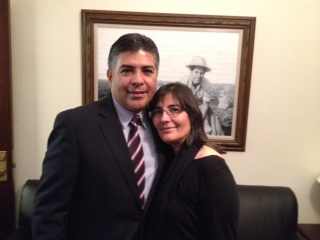 Needless to say this is a moment to be proud of—and I wish Tony well as he tries to negotiate some justice and change and to realize some badly needed hopes in the hell pit of dealings and delays, squabbling and surprises that make up the U.S. Congress.
And I don’t exaggerate when I say that. There’s hell fires there, but I believe Tony can do this—and with grace and dignity (which I’m also aware is hard to find in some of these circles).
Congratulations to my daughter Andrea and Sean as they embark on a new life together.
And congratulations to Tony as he tries to do what few have done in Congress – not just survive but stay energized and inspired to make a defining difference.
c/s
general
Do you like this post?
Tweet